We originally set up #newwinethisweek to explore new grapes varieties and new wine regions; to expand our horizons and avoid the default choice on a Friday, Saturday, Sunday, Monday, Tuesday, Wednesday, Thursday night etc! But sometimes it’s great to just go for something you know, something reliable, something comforting.

One of those go-to wines is Rioja, the king of Spanish reds. Rioja has become a brand name and I often wonder whether the majority of people picking it up off the supermarket shelf realise it is a place and not a grape; Sancerre, Chablis and Chianti also suffer the same misunderstanding for the most part I’m sure. But that is often the problem with old world wine; you are expected to know what’s in the bottle by solving the puzzle on the label… so let’s make things simple… 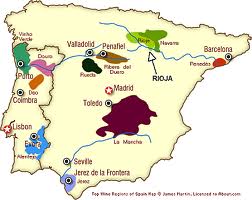 Rioja is an inland region in northeast Spain, which produces red (tinto), white (blanco) and rosé (roasado) wines. It was the first region in Spain to be granted Denominación de Origen Calificada (DOCa) status, which is awarded to regions with a proven track record of consistent quality; currently there are only two such regions in Spain; Rioja and Priorat. We are focusing on the famous red wines of Rioja this week, where the dominant grape is Tempranillo. Most of the red wines are usually a blend of grapes however, which might also include Garnacha, Graciano, and Mazuelo, and there are an increasing number of bodegas including Cabernet Sauvignon, which personally I feel is a bit of a shame, but I’m a traditionalist.

The other thing a Rioja label will tell you (if you know what to look for) is how long the wine has been matured for; there are four classification levels in Rioja, each with strict rules on how long, and in what, the wine must be aged; this classification must be declared at the time the grapes are harvested, so a wine maker can’t start out making a Crianza and then decide its looking great and “upgrade” to a Reserva, for example.

Rioja – if that’s all the label says the wine will have spent less than a year ageing in an oak; if the word “Joven” appears on the label it will not have seen any oak at all. These wines are designed for very early drinking and possess very fresh red fruit flavours

Rioja Crianza must be aged for at least two years, at least one of which was in oak. Again these wine are very approachable early on their life, with flavours of strawberry and just a hint of vanilla for the short time in oak.

Rioja Reserva is aged for at least three years, of which at least one year is in oak. These wines have more complexity and are often best drunk a couple of years after release so the fruit and sweet spice notes can come together in a delicious and harmonious way.

Rioja Gran Reserva wines will be aged at least five years, with two of those years in oak. Many producers choose to age their Gran Reservas for even longer, often another four to eight years, but the Marqués de Murrieta 1942 Gran Reserva wasn’t released until 1983… after 41 years of aging! Expect lots of complexity and plenty of vanilla and coconut in beautiful harmony with the elegant red fruit.

This classification isn’t a guarantee of quality; a good winemaker’s Crianza can be far better than a poor winemaker’s Gran Reserva. The wines are just different in style.

So we know where it’s from, what’s in the bottle and how long it has been aged… let’s got onto drinking some with a few recommendations; where possible I’ve selected a couple of different classifications within each retailer:

Or how about trying Decanter magazine’s top wine of 2013?

You know the drill by now… buy a bottle, have a slurp and tell us what you think!

Posted on October 6, 2014, in Uncategorized. Bookmark the permalink. 13 Comments.