What happens when you can’t drink wine?

That’s one hell of a scary thought isn’t it? Well it could happen to you… As it’s happened to me for the last 10 days! I got hit hard with gastroenteritis which basically meant nothing was eaten or drunk for quite some sometime without dire consequences! And it was so difficult because I do love my food and drink!

Luckily for me it didn’t put me off reading about the subject or watching it on TV. I know some people struggle with the thought of eating and drinking when they’re ill… But I’m bigger than that (probably one of the reasons why I am bigger!)

I’ve had my nose in Decanter and Fine Wine magazines, as well as many of the books I’ve collected over the past months. In the background has been a constant stream of education in the form of the Good Food Channel, or The Travel Channel if Floyd was on! But this got me thinking. There’s not much on the old goggle-box about wine is there? Even the recent rebirth of Food & Drink (not that it has anything to do with the grand old series) has shied away from actually telling you what the wine is or how much it cost! In fairness, the only half-decent attempt at wine on TV these days are the recommendations on Saturday Morning Kitchen. And I never thought I’d hear myself say that!

So I had a look through my dusty DVD selection and found 2 TV series and 2 films worth finding for those times where you yearn for a good drop but are unable to indulge. Or you could just watch them while you drink under normal conditions!

OK so I’ve written about this series a few times already, most recently as a great Xmas present! But I refuse to apologise for Keith Floyd is a hero, who changed the way cooking was transported into our houses. I also struggle to remember the real title of the series as it has been dubbed “Drink along with Floyd” in this household!

The series consists of Keith and has companion, Master of Wine Jonathan Pedley, travelling around the famous regions of France. Each episode is 30 minutes long and focuses on 2 wines per region, with Keith telling you which wines they will be drinking the following week, so you can pop and pour along with them. It is Floyd at his best, combined with interesting information about the regions, the grapes and various aspects of wine making. Keith also cooks a couple of local recipes in each episode and it really is great fun. You can also buy the accompanying book to the series for next to nothing on Amazon (second hand). Give it a go – you’ll love it.

I am a big fan of Jancis’ writing but it can sometime come across as a bit stuffy and, well old school. I was delighted when I started watching this series at how informal the direction and presentation of the programmes are… and how enjoyable they are too.

The series consists of 10 programmes, each based around the “famous grapes” of the world. What is particularly engaging is that most of the episodes contain some French and New World footage – and the views of the French on the Aussies and vice-versa is hugely enjoyable!

Jancis is a hugely respected figure in the world of wine, giving her access to the likes of Guigal when discussing Syrah from the Cote Rotie, or the magnificent Lalou Bize-Leroy in the Pinot Noir programme. But my favourite scene of the whole series is when Dominique Lafon, of Meursault fame, refuses to spit the remnants of an Aussie Chardonnay on the floor of his cellar. Beautifully French!

The series is part travelogue and some of the visual glamour will make you crave a visit to sme of these wonderful places. It provides easily accessible and understandable information about wine making, tasting and many other aspects in a very entertaining and laid back manner. Oh and some of Jancis’ outfits are spectacular!

The movie that made Californian Pinot Noir cool! Sideways was actually nominated for 5 Oscars, picking up the going for “best adapted screenplay”. The film follows two mates in their forties on a bachelor weekend in Santa Barbra wine country. Miles is the wine nerd with no money, Jack his mate with the money and the palate of a baboon. The film in some ways is a series of sketches, which knits together beautifully to tell an amusing and enjoyable story. The film is intelligent, funny, even moving, and the acting is brilliant all round. The characters are given real depth and certainly encourage an emotional response.

The scenery is stunning; it will make you want to get on a plane and explore. And many have. Most of the film is set in the Santa Ynez Valley, where wine tourism exploded on the back of the film’s acclaim. Miles’s favourite grape variety in the film is Pinot Noir, and sales of Pinot went up by 16% in the US – at the same time he hates Merlot… Sales declined by 2%! This leads me to my only issue with the film. Miles’ most prized bottle is a Cheval Blanc 1961… A blend of Cabernet Franc and Merlot !!

Sideways is a marvellous film whether you love wine or not – the book by the same name is even better. 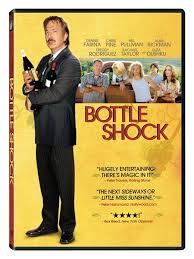 How can a film with Alan Rickman and Bill Pullman fail? Well this one doesn’t! The story is loosely based on the famous Judgement of Paris in 1976, where the English wine merchant Steven Spurrier (played by Rickman) arranged a tasting competition, pitching the best Californian wine against the whites of Burgundy and reds of Bordeaux. Much has been written about the occasion, I even talked about it a little in my first ever post on the blog!

Bill Pullman plays Jim Barrett, the owner of Chateau Montelena, who wants no part in the competition but his son Bo (Chris Pine) goes behind his back to enter the winery’s Chardonnay into the competition. Only this week did the real Jim Barrett pass away at the age of 86, his son saying he “died of a life well lived”.

The film is a very light hearted comedy but beautifully shot and brilliantly acted. The supporting cast is also excellent and it’s a good old comedy romp to enjoy with a bottle of (American??) wine on a Friday evening.

This is one for real wine geeks only! Two and a half hours dedicated to the impact of globalisation of wine and wine styles. Actually sound dreadful doesn’t it? Well it isn’t! It’s a kinda Michael Moore takes on the wine global giants sort of thing, with very lo-fi production, shaky hand held cameras, and a cameraman who gets very bored of his protagonist very quickly.

The real stars of the film are the small producers from various parts of France, Italy and Argentina. Their stories are interesting and their views are sound, if different, to the “bigger” characters like Michel Rolland, Robert Parker and the Mondavi family.

There is plenty of big-bad-guy propaganda on show here, but the film is still an interesting look at the global wine economy and more importantly, some of the great characters within it.

If you have any recommendation then please do leave them in the comments box!

Posted on March 19, 2013, in Uncategorized. Bookmark the permalink. 1 Comment.