Pauillac – the old and the new

In two chateau visits in Pauillac, the heart of Bordeaux, what was especially interesting (along with the marvellous wines of course) was the juxtaposition of old and new. At both Chateau Lynch Bages and Chateau Pichon-Longueville Baron, I witnessed a celebration of the latest technological advances but with a respectful nod to tradition and the way things have been done for centuries. 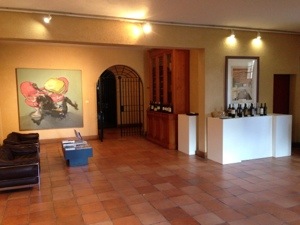 Starting in the airy reception area at Lynch Bages with its minimalist furnishings and soft lighting, you immediately know that money has been spent to ensure you will be well looked after (for your €9 outlay!). Our wonderfully chic guide took us straight into the ultra modern vat room, with its state of the art press and gleaming stainless steel tanks, each built to the perfect size to receive the fruit from its specified plot. The estate is obviously very proud of its technology but its the old vat room that really inspired me. The smell of the old wooden vats was delightful and knowing they had been in situ for almost 100 years sent a tingle down my spine. The idea of fires and their embers being used to control the temperatures during fermentation is a lot to take in in this day and age.

The next stop on the tour was even more impressive. The space above the old vat room has also been preserved as a homage to the past. The sorting tables, pulleys and iron tracks used to transport the grapes have all been meticulously preserved, along with the fabulous old screw-press – just think of the work that went into any of your seriously old bottles! We ten passed through the expensive smell of the barrel cellars, brand new bottling line and into the delightful tasting room.

The two wines we got to taste were both from 2006, firstly Chateau Ormes de Pez (also owned by the Cazes family) followed by the Chateau Lynch Bages:

Chateau Les Ormes de Pez Cru 2006, St Estephe, Bordeaux (Lea & Sandeman £22.50)
58% Cabernet Sauvignon, 36% Merlot, 6% Cabernet Franc
I tried the 2001 towards the end if last year and was left frustrated by the lack of balance after a very promising attack – the 2006 is much more together. This wine is powerful and earthy, lots of concentrated cassis fruit but also just a hint of jammy raspberry. There is excellent structure and the tannins are still a bit firm but there is plenty of fruit and acidity to bring it all together over the next couple of years. 91+ points

Chateau Lynch Bages 2006, Pauillac, Bordeaux (Berry Bros £65.00)
79% Cab Sav, 10% Merlot, 10% Cab Franc, 1% Petit Verdot
Each time I try Lynch I always think it just smells expensive! On the nose there is lots of concentrated cassis fruit but then followed by smoke, cedar and spice. The wine is still very young and listed but there is real purity to the wine, with lots on blackcurrant and blackberry goodness. Real backbone with lots if young tannin but there’s plenty of freshness and some deliciously exotic spice in the background. Don’t think about touching for another 5 years. 94 points

But at Lynch that us not the end… For the Cazes family have created their very own Bordeaux Disneyland, complete with Boulangerie, Epiciere, fashion store, wine shop and bistro! They are actually to be applauded for this as Pauillac itself isn’t the most picturesque place – its just a shame everything was running at a minimum level due to the tornado of two nights previous

And onto Chateau Pichon-Longueville Baron… I don’t mind telling you I was like a giddy toddler when the Cinderella towers came into view as we approached along the D2! This really is the most beautiful chateaux in the Medoc and it did take my breath away. This was one if the first appointments I booked when we decided to tour Bordeaux after I attended a magnificent vertical tasting back in March. 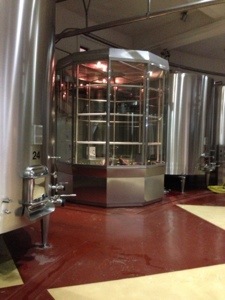 Our guide was wonderful… I just wish I could remember her name! On this tour it was just me and The Fish and we laughed all the way round. The chateau looks so traditional and elegant from the outside, but don’t be be deceived, for within, or even below, AXA’s investment appears to have been put towards building a spaceship! In Chateuneuf aliens may have been outlawed, in Pichon they may actually have landed! But it is very impressive – from the ultra-modern optic sorting machine, to the command centre that is the temperature control booth in the vat room, nothing here is left to chance. From there its on to one of the barrel cellars, which lies directly underneath the magnificent ornamental lake. When we were there they were moving some barrels in preparation for a classical music concert… How things have changed! 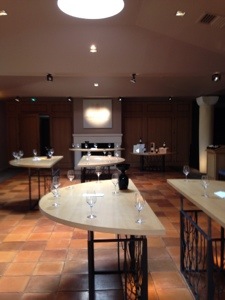 Finally we entered the luxurious tasting room, with elegance to match the Chateau’s facade, and a tasting of 3 wines, all from the 2008 vintage:

Chateau Pibran Cru Bourgeois 2008, Pauillac, Birdeaux (N/A UK)
51% Cab Sav, 49% Merlot
Owned by the Cazes family but vinified at Pichon-Baron, this is a very fruity wine with good acidity and a lovely freshness. There’s some good tannic structure but its really quite simple with a short finish. Very un-Pauillac. Hmm… Maybe not so bad its not available in the UK! 86 points

Tourelles De Longueville 2008, Pauillac, Bordeaux 2008 (Farr Vintners £17.92)
65% Merlot, 20% Cab Sav, 15% Cab Franc
The second wine of Pichon Baron… But made to be itself, hence the high proportion of Merlot in the blend. It’s obviously not noticeably Pauillac but that’s not to say it doesn’t have its own charm. Brightly coloured and with concentrated, ripe red fruits. The wine is big in body and very fresh upfront and there are notes on mineral and some animal too. I actually quite like this – quite Pomerol in style actually. 91 points

Chateau Pichon Longueville-Baron 2008, Pauillac, Bordeaux (Fine & Rare £61.00)
71% Cab Sav, 29% Merlot
After enjoying the wines at the tasting earlier this year I was particularly looking forward to this one. Lots of big, bold blackcurrant with a whiff of cassis concentration, with delicious smokey cedar and lovely mineral notes. The texture of the 08 is like a cloak of velvet overnight your mouth, before the tannins kick in and close it up a little. The fruit is deep and concentrated, with a hint if minty freshness, balanced beautifully by a streak if lively acidity and supported with an earthy, mineral finish. Years to go until it reaches its peak but well worth the wait. 94 points 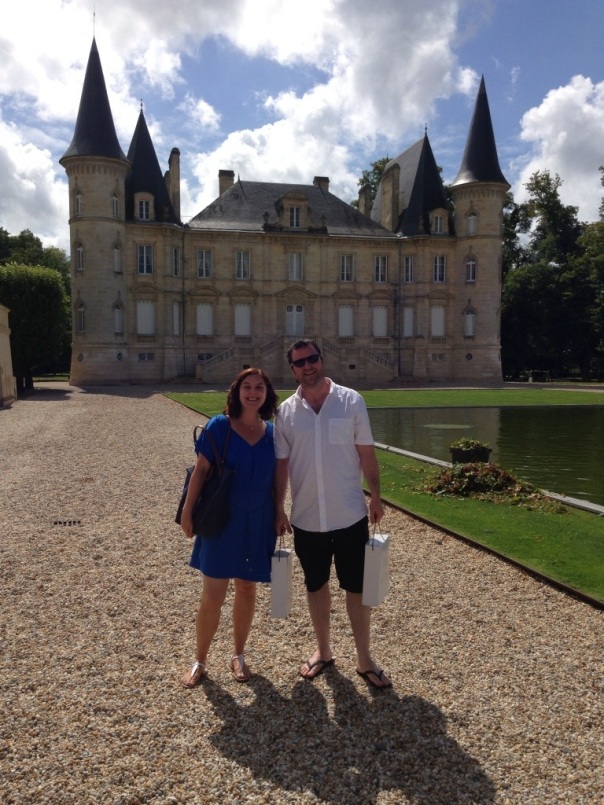 Oh and here’s a photo of Chateau Latour, across the road from Pichon… They wouldn’t let me in!