Ornellaia – how super is this Tuscan?

I suppose it’s fair to say that I’m bit of a traditionalist when it comes to grape varieties and regionality. Recently I’ve got a little bit bored of the “international style” of “international varieties’ that are rearing their heads at so many wine tastings these days. The biggest culprit for me is Cabernet Sauvignon; I have tasted so many fantastically made, super-extracted, super-concentrated, super-oaked wines… but they could come from anywhere. These wines are coming from Bordeaux, from Rioja, from Ribero, from California, South Africa; they are brilliant wines… but they don’t scream about place.

It is for this reason that I am late to the Super Tuscan party. I haven’t been avoiding the wines, I just haven’t made a big effort to seek them out. But when a tasting came up on my doorstep at Roberson, I decided it was time to dive in at the deep end; the tasting was a vertical of the critically acclaimed and super-expensive Ornellaia.

Before we get into the wines, here’s a quick history lesson. Until the 1970’s, Tuscany was (rightly) only famous for the Sangiovese-based wines of Chianti, Brunello, and Montepulciano, which vied with Nebbiolo of Piedmont for the mantle of the greatest red wines of Italy. But all was not well in the region. In 1971 the Antinori family, whose Tignanello estate was one of the jewels of the Chianti DOC, produced a wine that included Cabernet Sauvignon in the blend and was aged in small French barriques. The scandal was audible all over the wine world and Antinori withdrew from the Chianti DOC, deciding to sell their wine under the lowly “Vino di Tavola” classification.

Further west on the Tuscan coast in Bolgheri, Nicolo Incisa della Rocchetta, a cousin of Antinori was also experimenting with international varieties at Tenuta San Guido. The first release of Sassicaia was the 1968 vintage (released in 1971) but it wasn’t until the 1985 vintage was awarded 100 points by Robert Parker, the wine world started to really take notice of the Super Tuscan revolution.

In 1981 Lodovico Antinori (yes the same family!) bough 41 hectares of land adjacent to Tenuta San Guido, and Tenuta dell’Ornellaia was born, releasing it’s first vintage in 1985. For such a young estate it sure has endured a turbulent inauguration. Robert Mondavi took control of the estate in 2002 and formed a partnership with the Frescobaldis (a famous wine family in Tuscany), who assumed full ownership in 2004 when Mondavi was bought by Contellation Brands. Since 1991, the one constant has been the involvement of Michel Rolland as consultant winemaker.

Today the estate consists of 99 hectares, growing a wide variety of grapes including Cabernet Sauvignon, Merlot, Cabernet Franc, Petit Verdot, Sauvignon Blanc and Viognier. Interestingly no Sangiovese is grown at Ornellaia but a quantity is purchased from a neighbouring vineyard after each harvest; the soils at the estate are clay/gavel and clay/limestone, Sangiovese thrives on land with a far higher limestone content.

The estate now produces 6 different wines and we had the opportunity to taste them all:

A blend of 93% Sauvignon Blanc, 7% Viognier, the wine is fermented and matured a third each in stainless steel, new oak and old oak.

The only white wine produced at the estate did absolutely nothing for me! The nose was slightly oxidised (the way it’s made apparently) and the nuttiness masked the citrus fruit that was hiding in there somewhere. There was a decent touch of acidity but to my taste this wine was all about heavy-handed winemaking and spoke nothing of the grape varieties. When Mondavi got involved he stopped production of this wine; it’s a shame someone had a different view! 84 points

Very earthy nose with plenty of black cherry and a spicy, smoky character – the Sangiovese is certainly detectable. Good concentration and acidity on the attack with blackberry and dark cherries, supported with pepper, smoky spice notes and a rustic tannic structure. The first 90% is delightful but there is a very hot alcoholic hit at the end. 88 points

Made from declassified lots from the Ornellaia vineyard – I don’t know why they bother! The aromas are actually very enticing with bright blackcurrant fruit and a whole host of exotic spices and cedar. On the palate however, all I can tell you is alcohol and wood – it really was like licking a chopping board with spilled grappa. Sorry! 78 points

The second wine of the estate and a real jump up in class and style. Red berry fruit is beautifully entwined with a blackcurrant backbone and supported by gentle notes of vanilla and other exotic sweet spices. The wine is soft and silky at first then there is a good bite of tannin. The acidity is bright and the fruit is a delightful concentrated blend of red- and black- currants. There is spice, smoke and mineral; a wine with a good few years ahead of it. 92 points

With the support act over it was now onto a 5-vintage vertical of Ornellaia. While the guys were setting up they noticed that one of the bottles of 1997 was faulty so the taster was a little less than the others. Without a direct replacement, the Roberson team decided to pour a Sassicaia 2004 instead so we could compare the two wines from the same vintage – great thinking!

So concentrated and opulent on the nose! Lashings of blackcurrant and blackberry fruit with a gentle but very classy smoky, oaky undercurrent. The attack is so powerful – a full-on avalanche of blackcurrant and searing (wonderful!) acidity. The tannins are ripe and young as you would expect, but the minreality, smoke and sweet spice is all there. The texture is silky and the finish is chocolaty. This is a fabulous wine but a few years off showing its’ very best. 94+ points 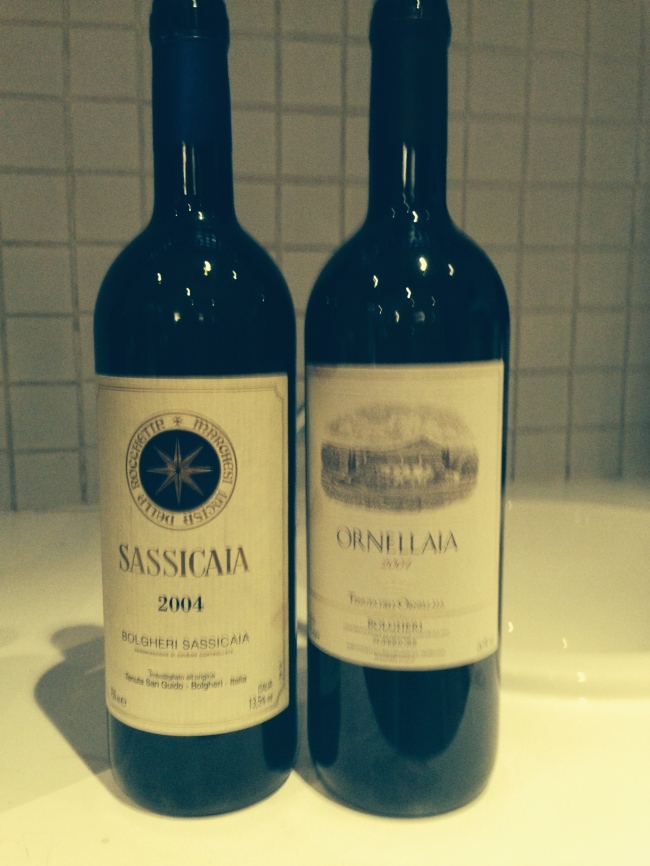 Wow! The nose is pure Cabernet Sauvignon; pure Ribena with a wonderful smack of mint/eucalyptus – it really reminded me of a top-notch Coonawarra! But there is a savoury leather edge giving some clue to it’s 10 years also. The palate is ripe and lush with sweet concentrated fruit; blackcurrants and damsons dominate with leathery, slightly smoky notes and a cool but gentle menthol hit at the end. The balance is astounding and the length is amazing. A truly brilliant wine. 97 points

Is this really from the same vintage?? The woody and earthy nose suggests at least 5 years on the Ornallaia but don’t let that put you off. There is still plenty of sweet blackcurrant and blackberry fruit, starting to become a touch raisined but sitting very nicely with the savoury leather and notes of slightly roasted meat. The texture is superbly elegant, without the power of the Ornallaia but with plenty of style and grace. The fruit is muted but the acidity is still bright and in great harmony with the now gentle but luxurious tannins. Another great wine but how can the 2 wines come from adjacent vineyards in the same vintage?? I love wine! 95 points

Nice concentration of blackcurrant and black cherry on the nose, supported with lots of earthy and tobacco notes, a good dose of gravelly minerality and pencil shavings. Lots of acidity and energy on the palate with bright fruit and lots of complexity with savoury notes of leather, herbs, smoky spice and graphite. This is an astonishingly elegant Ornallaia – it’s lost all of it’s “muscle” and is all the better for that, really showing the sensual side of the estate. Wonderful. 95 points

I seemed to be the only one in the room standing up for this one – I thought it was fabulous! If I had tasted this and 97 blind I would be convinced this was the younger sibling, as there is so much energy and life on the nose and palate. There is a wonderful amount of lively red fruit at play here, combining wonderfully with the concentrated blackcurrant. The secondary flavours are savoury; mushroom and leather, combined with smoky, roasted spice. Another fantastic wine. 95 points

Lots of evolution on the nose here with dried, raisined fruit and lots of savoury complexity. Earth and leather combine elegantly and there is a note of graphite and hint of sweet spice too. On the palate the wine is very dry with dusty tannins. Most of the primary fruit has disappeared and we’re into dried fruit, mushroom and leather territory. A very graceful wine but I would be drinking up now; I think it’s on the way out. 92 points

The final wine of the night was from the 7 hectare Masseto vineyard, which is 100% planted with Merlot; Tuscany’s answer to Petrus?

100% new oak? You bet! Amazingly concentrated aromas of red and black fruit, supported with violets and super expensive vanilla; this is a Ferrari wine and boy does it know it! The palate is too much everything! Extracted, concentrated, textured and super rich. It’s a brilliant wine and is nowhere near its peak. Ripe fruit, liquorice, smoke, sweet spice, cedar – utterly beguiling. The texture coats your entire mouth and is silky smooth, the tannins are ripe and grippy and will last for decades. It is brilliant, but it’s not my kind of wine… It’s basically got too much of everything. It’s caked in make-up and really could come from any cellar with enough time and money… 95+ points

I posed a question in the title about how great this Tuscan really is; for those of you who measure Cabernet blends by Bordeaux classifications, I would put Ornellaia up with the super-seconds but perhaps without the staying power. They are fabulous wines with a delightful blend of elegance and power and if I had the cash I would love to add a few to my cellar. As for Masseto, only those with £600+ to spend on a bottle of wine can answer whether it’s worth the money – if I had £600 to spend on wines from the estate I would get far more enjoyment from three bottles of Ornellaia itself. These are wines that live up to the hype.

Posted on May 11, 2014, in Uncategorized. Bookmark the permalink. 8 Comments.