I am a big fan of the film Sideways. I love the scenery, the characters, the storyline and, most of all, the dialogue, which never fails to make me fall about laughing. The film won an Oscar for Best Writing Adapted Screenplay and did a lot for wine tourism as Sideways became a huge box office hit upon its launch almost 10 years ago, in October 2004. 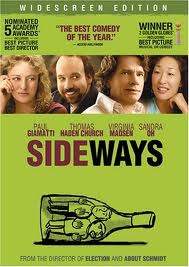 Two of the key settings in the film are the Windmill hotel and The Hitching Post restaurant. Many of the scenes are set in these locations and they have become destinations for wine geeks around the globe… including this one! When we were planning our holiday and realised we would be driving past Buellton on our way from LAX to Napa we just had to do it; so we booked a night at The Windmill and made a reservation at The Hitching Post… and I am so glad we did!

The hotel is a Days Inn situated less than a 100 metres off Interstate 101. It’s not luxurious or flashy, and apart from a small poster behind the reception area, they don’t play on the Sideways association. The Windmill is a comfortable and welcoming pit stop with wonderfully friendly staff and clean surroundings. It made us smile, especially at $69 a night (and a very healthy £:$ exchange rate!).

As we waited for our reservation at the Hitching Post we strolled over to the Club House just as it opened at 4PM and ordered a couple of glasses of refreshingly crisp Chardonnay from nearby Paso Robles. The bar is great fun with lots of gaming machines and 4 pool tables, charged at very little per hour. The staff are welcoming and extremely funny, making you feel as at home as one of the locals supping a beer at the bar; it’s the kind of place I wish I could walk into after a hard day’s work. 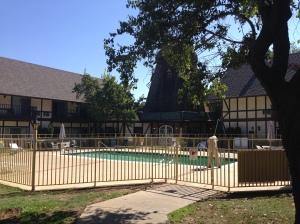 The welcome is warm and it feels like waking into someone’s (very large) home. The tables are well spaced and we were guided to our prime position, right next to the indoor BBQ pit. The “pit” actually sits behind a glass enclosure but you can watch every move made by Executive Chef (and Magnum lookalike) Bradley Lettau and Sous Chef Jesus Montano. There seems to be three different kinds of seasoning and three more marinades that help give the meat and seafood its delicious barbecued flavour as it cooks long and slow over the open fire.

Before deciding what to eat we were handed the wine list… I have no idea why as there was never any doubt about what we would order; it just had to be a bottle of Highliner, described by Miles as “tighter than a nun’s arse, but great concentration”! Hitching Post owner Frank Ostini and former fisherman Gray Hartley make the Hartley-Ostini Hitching Post wines, with a focus on Pinot Noir that now also extends to Syrah and Cabernet Franc.

Highliner is the top-of-the-line bottling, blending the best barrels from the best vineyards. The wine is matured in 70% new French oak and aims to “combine the forward fruit and richness of the Santa Maria Valley, with the earthiness and structure of fruit from the Sta. Rita Hills”. The 2011 was on the menu and it was a very good wine indeed: 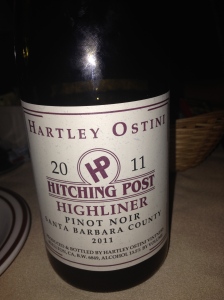 I don’t quite agree with Miles about the tightness – this has a beautiful combination of black and red cherries with layers of red currant and raspberry coming along on the mod-palate. The tannin is firm but elegant and the finish is spicy and smoky, with hints of Chinese 5-spice. It’s a Pinot with guts but also good manners. I wish we could get wine this good at prices like this in restaurants back home. 93 points

The Fish and I were hungry so we went for the 26oz Angus rib-chop, which at £53.95 sounded like great value… and that was before we realised what it came with. All entrees include:

Your choice of Rice Pilaf, Baked Potato or French Fries (we could choose a couple as it was for 2!)

Your Choice of Organic Mixed Green Salad or Today’s Soup

Your Choice of Bay Shrimp Cocktail (add $1), Today’s Soup or Neither (Less $1) 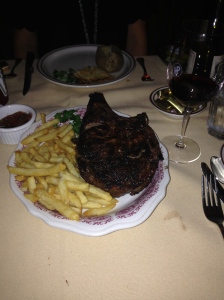 The starters and accompaniments were delicious but the rib was stunning. We watched it cook for about 30 minutes (to medium rare – slow and low baby!) on the grill as our various appetisers came and went and when we took our first bite it was meltingly tender and the flavour was smoky and meaty and just damn fantastic. We love Hawksmoor back in London but they now have a lot to live up to, especially as a prime-cut like this would not be far off £100.

Too full for dessert, we made like Miles and Jack and wandered past the Ford garage, back to the Windmill, along highway 246.

There’s little else to say except that if you are in the vicinity, be sure to have your own Sideways experience; its brilliant for what it is, not just because of the film, but its so much fun to visit both places and quote lines from the film every 2 minutes…

“I’m not drinking any f*cking Merlot!”

Posted on August 7, 2014, in Uncategorized. Bookmark the permalink. 17 Comments.