San Sebastian has been on the to-do list for a few years now. For various reasons (or poor excuses – expense, difficult to get to) we’ve ended up doing long weekends in Madrid and Barcelona instead, both of which are marvellous cities. This year we decided enough was enough so we booked our flights and 3 nights in the old town and all I can say is: Wow. Wow. And wow again.

Here are ten things I learnt or loved during my time in what can only be described as Food Disneyland. There are some wine pointers but there is so much more to share with you, so please excuse my digressions… there was nothing I ate over 4 days that I wouldn’t greedily gobble up again!

(Loads of pics here as I had to photograph everything that ended up on my plate!)

1. It’s not a difficult place to get to from the UK

A 90-minute flight from Stansted to Bilbao and an hour on a bus, which departs at 45 mins past the hour, from a bus stop directly outside the arrivals hall (€16.50 per person – pay on the bus on the way there, but from the PESA station on the way home – nowhere tells you this until the bus driver tells you gruffly!). The bus station in San Sebastian is a 30-minute walk to the Old Town and the beach, or there are plenty of taxis.

We stayed in the Old Town, which is the place to be for all things foodie. However, just 10 minutes to the west is the expansive sunbathing haven of La Concha (named after the shape of the shell it resembles), and 5 minutes to the east is the surfer’s paradise of La Zurriola. If you were dropped into the Old Town you wouldn’t have a clue that you were anywhere near the seaside.

The view back from Concha beach

3. Pintxos is the most social and enjoyable way to eat

Eating pintxos is the ultimate pub-crawl for gastronauts. A glass of wine, a couple of edible delights for only a few euros then off to the next one; the most difficult thing is not getting too full too quickly! Many pintxos are served on pieces of bread, as the origin on this style of food came from customers putting pieces of bread on top of their drinking glass to stop the flies getting in! 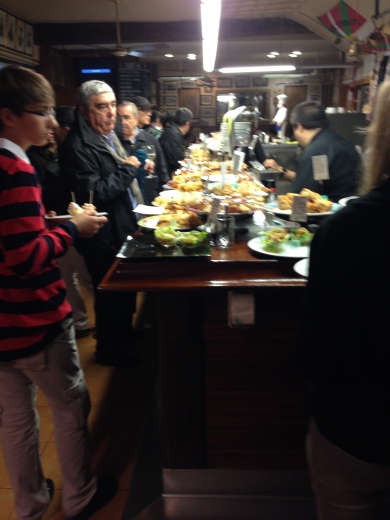 A view from the bar

I originally booked a table at Murgaritz, which this year was voted the 4th best restaurant in the world. There is a no choice menu, which will set you back €185 per person – I decided to cancel the reservation. For €185 in San Sebastian you can eat out like a king; lunch and dinner for over a week… Including drinks. We ate our way through the recommendations in a guide book and consulted Trip Advisor, but the truth is it is very difficult to eat badly in San Sebastian, and most pintxos cost around €3.

My lunchtime sandwich will never look the same!

5. Don’t be afraid to order something hot

All of the bars in San Sebastian have a selection of food ready to eat on the counter, but most also have a menu of hot pintxos – don’t miss out on the fabulous slow cooked pieces of meat and deep-fried delights… 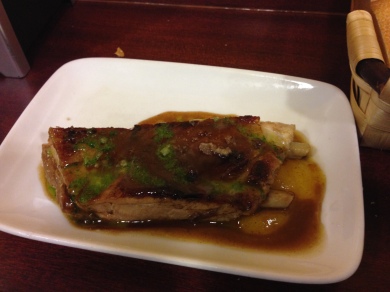 6. Anything on a stick tastes great

Deep-fried black pudding donuts anyone? Yes please!! The Basques like to deep-fry stuff, which is very lucky because deep-fried stuff is my favourite stuff to eat! The batter they use has a delicious touch of sweetness that adds a delightful balance to the food whether it’s earthy black pudding or something as delicate as langoustine (served with strawberry jam!). 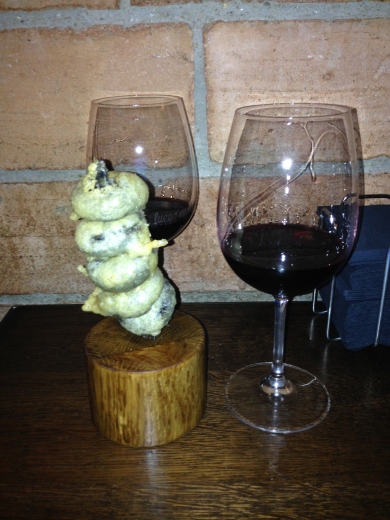 There are three Txakoli (pronounced Cha-koli) DOs in Spain producing delightfully fruity and slightly spritzy white wine, made predominantly from the Hondarribi Zuria grape. The wine is poured from a great height to keep the tiny bubble intact and tastes crisp, mineral and has a hint of the sea. The best thing of all is that a glass costs about €1.50 and it goes brilliantly with any of the pintxos on offer. I’m now looking for a UK supplier! 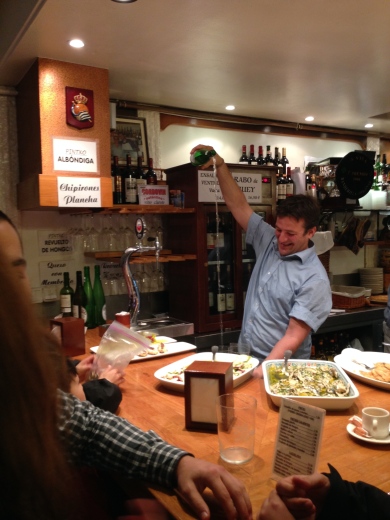 How to pour Txakoli

8. Rioja is a third Basque

The Rioja region is split into three sub-regions – Alta, Baja, and the Basque district of Alavesa. Many of the bodegas in Rioja play down the sub-regions and most of what we see in the supermarkets doesn’t differentiate on the label as the wines are often made from a blend of grapes from all over the region. There is plenty of Rioja to be enjoyed in San Sebastian…

9. There is no wine prejudice in San Sebastian

Every bar and restaurant has Txakoli and Rioja by the glass but don’t think that you will be stuck for choice during your stay in San Sebastian. For white wine fans there is plenty of Albarinho, Verdejo and Godello, as well as more unusual selections such as Gewürztraminer or the delightful Pansa Blanco (more commonly known as Xarel-lo and used for Cava production). For red wine fans, make your choice from Ribero, Navarra, Priorat or Valencia – if it’s Spanish and wet you’ll find it in San Sebastian.

10. These are the places I will make a beeline for when I return… and I will return very soon!!

The Spanish know how to do squares… My two favourite drinking spots were in the prime people-watching locations, opposite each other in the square in front of the Santa Maria del Coro church – if you can’t get a seat outside either the bars then just enjoy your beverage seated on the steps outside the church.

Best seat in the house?

Casa Vergara – 20 wines by the glass from all over Spain, priced from €1.50 for a simple but delicious Txakoli to €5.00 for an aged Tempranillo based red from Navarra – simple but effective.

Which red shall I have today?

This list could go on and on… But these are the 5 places I would return to if I only had 1 day to eat myself senseless in this great city:

Borda Berri – a tiny space with a choice of 12 exquisite dishes. There’s nothing on the bar so everything is ordered at the bar – don’t miss the foie gras terrine, slow cooked duck or meltingly-good pork ribs. Great Cava cocktail too.

Bar Zeruko – Walking into Bar Zuerko makes you smile – it’s worth coming here to look at the display alone. This is molecular gastronomy that tastes great. Standout dishes were the sea urchin custard, deep fried langoustine with strawberry jam and octopus kebab.

Casa Gandaraias – We fancied a sit down meal on the Monday night and found this place courtesy of the fabulous looking cuts of beef in the window. We had to make a reservation for later that night but it was well worth the wait. A kilo of well aged bone-in rib to share for €35 (including fries!), washed down with a fantastic 2005 Clos Martinet Priorat. Very friendly and very tasty.

La Vina – eat here and you’ll find the best cheesecake ever (sorry Louisa!). Everyone in the bar is eating a slice and washing it down with a glass of Pedro Ximenez. The friendliest staff in a very friendly city 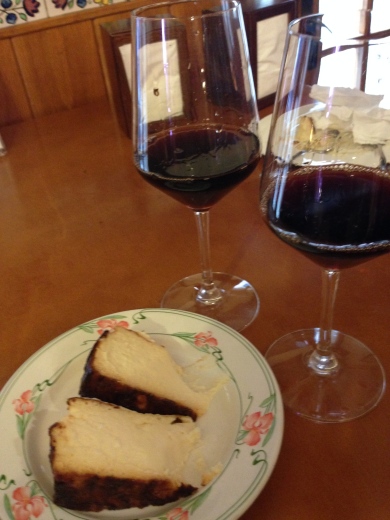 The best cheesecake in the world… Ever!

Posted on October 30, 2013, in Uncategorized. Bookmark the permalink. 7 Comments.