I was having a look through the article archive the other day and realised that although there are a fair number of pieces relating to Burgundy, there are none dedicated to white Burgundy. This came as quite a shock as I am a big fan of classy Chardonnay from the Cote de Beaune so when a tasting of mature white Burg reared its head at Handford Wines I signed up immediately.

There is great value to be found in the Macon but the real heartland for white Burgundy is the Côte de Beaune. The Grands Crus are found in the famous villages of Puligny-Montrachet and Chassagne-Montrachet and from the famed hill of Corton, which is shared between the villages of Aloxe-Corton and Pernand-Vergelesses. Meursault is held in the same high regard by many even though none of its vineyards were designated at the highest possible classification. The Premier Cru vineyards of Les Perrières, Les Genevrières and Les Charmes are considered by many to be of GC quality, which is often reflected in the prices of the wines.

Loving white Burgundy is an easy thing to do but all has not been well in the past couple of decades. The vintages between 1996 and 2002 were affected by premature oxidation (premox), which caused many age-worthy wines to become oxidised and undrinkable. There are many theories to how this happened, including poor quality corks, excessive stirring of the lees, and insufficient use of sulphur dioxide in the winemaking process, but it appears no-one really knows what caused the purchase of these highly priced wines to become such a gamble.

The good news is that we are over the worst of it and there has been very little talk of premox for the past 5 years… but what of those bottles that have been left to age and should be in the middle of their drinking window right now? On a Thursday evening in June I got the opportunity to try 10 wines from 1995 and 200… with a 30% failure rate…

The first flight consisted of a set of wines from 1er Cry vineyards in Chassagne:

A little musky and nutty on the nose with some baked apple, a nice touch of fresh peach and a hint of baking spice. Bright with acidity on the palate with lots of apple but just a bit over-done on the oak and finishes a touch quickly. Classy but with a touch too much makeup. 92 points

Honey and toasted nuts on the nose with an edge of dried golden sultanas. The palate feels a bit tired and dried out suggesting it’s past its peak – the balance of acid isn’t what it should be, probably it once was. 90 points

Very funky nose with a touch of the farmyard and still a good hit of tropical fruit and some nutmeg. Lovely acidity on the palate and a long citrus-finish. Certainly not a shy wine but still going strong and very expressive. 93 points

Then we came to three wines in a row that were oxidised, all from Puligny. The first 2 were undrinkable, the third not worth discussing:

The next pair showed Puligny in a much better light! 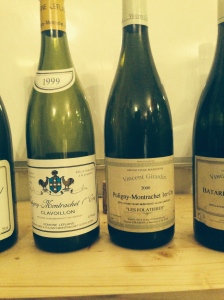 Rich and nutty with lots of apples and a heck of a lot of oak on the nose… but very sophisticated. Warm and toasty attack with apples, bright citrus and a finish of peaches poached with cloves. A real hug in a glass with lovely acidity, lovely balance. Burgundy at it’s richest and fattest! 94 points

All that’s good in aged white Burgundy. The aromas are nectarine and russet apples with pastry and vanilla cream. The palate is delightfully fresh and there is a wonderful intensity of fruit, balance of richness and acid, and all of the detected aromas coming together in the mouth. Wonderfully complex and great length. Marvellous stuff. 95 points

The final pair featured a couple of Grand Crus: 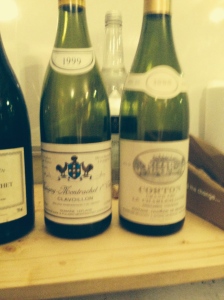 Rich and buttery with lots of fruit, apple, citrus and peach. I was hoping for a bit more from such a famous address but it all just fell off a little bit quickly. Nearly but not quite for me. 92 points

Aromas of rich and ripe fruit, apples, peached and a touch of the tropics, complimented by enticing nutty, buttery notes. Sweet citrus on the attack with mouth watering acidity that lasts for 60 seconds. A very well made wine with plenty of time ahead of it. 93 points

Posted on July 13, 2014, in Uncategorized. Bookmark the permalink. 1 Comment.